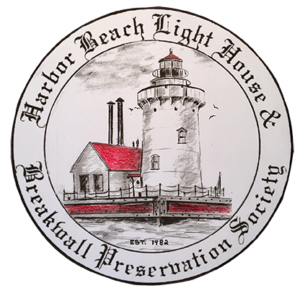 The Harbor Beach Lighthouse Preservation Society was formed in 1982 to address the condition we found it in that summer when we first saw it. The Coast Guard had painted the entire tower white. Window frames and windows, all trim, was completely white, eliminating the “face” that the windows, door and “cap” of the decks and lantern room on top show to the inside of the harbor. After removing USCG keeper staff a number of years before that, it had been determined by the USCG that lighthouses were no longer “necessary” as aids to navigation since everyone had GPS on board at that point. Not true! The larger ships and yachts may have had that, but most of the recreational community was lucky if they had a depth finder, never mind GPS!

Using that rationale, the USCG moved to “excess” lighthouses to anyone in the public that could demonstrate an ability to restore and open them to the public under the National Historic Lighthouse Preservation Act, passed in 1983 under the leadership of Dick Moehl, a lighthouse fan from the Mackinaw area. It took several years for the USCG and GSA to get to a point where they offered Harbor Beach to the public, and after spending time every summer restoring the lighthouse to a much better condition than we found it in, our Society decided to apply for ownership under the City of Harbor Beach, with the Society managing it by contract.

We felt it was important to bring the lighthouse title back to the people of Harbor Beach. Generations ago they had the vision and audacity to petition the Federal Government for $1 million spread over 11 years starting in 1871 to build the world’s largest man made harbor, offering shelter to the burgeoning amount of commercial and passenger traffic sailing past the town of Sand Beach. In the years previous, this traffic suffered a tragic cost in lives and property lost due to the much smaller size of vessels than today and the lack of a harbor of refuge between Port Huron and Saginaw Bay to enter during storms.

The harbor still stands today and is by all accounts the largest man made harbor in the world, if you don’t count river and other shipping centers that just add infrastructure to existing deep waters inland. The main breakwall is over a mile long, and it is a mile out to the lighthouse by boat, located on the southern end of that breakwall. The smaller south wall is about 3/4 of a mile long and completes the sheltered area of over 2 square miles. There is a gap in between that provides entry to the harbor.

In 2010, the GSA, USCG and State of Michigan transferred the lighthouse and the rights to continue occupying the bottomlands to the City of Harbor Beach, and a very successful first season of tours began in 2011.

The Society and it’s members are very proud of the restoration effort undertaken by President Skip Kadar, Ron Klebba and all of our volunteers. Our tours are a first rate journey into the past and present, and our docent volunteers are well trained and organized by Annette Sweet. The lighthouse is restored to an early 20th century style, full of antique furnishings and other period pieces that approximate the lifestyle of a keeper and his family. The view from the Gallery Deck is the best in Huron County. You can book your visit on this site and have your seat reserved for a tour. We hope you can come visit us this summer!