History of the Harbor Beach Lighthouse 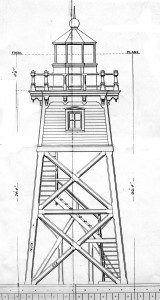 In the 1800’s, ships sailing up the Michigan coast of Lake Huron were protected from the prevailing westerly wind by the Michigan landmass until they reached Saginaw Bay. There the winds and storms blew unobstructed the length of the bay and often created treacherous, sometimes fatal conditions for schooners trying to cross the bay.

When the weather prevented the schooners from crossing the bay, they had to turn back and head for the safety of the St. Clair River, some 80 miles to the south. Great Lake captains demanded the government build a harbor where they could seek shelter from the Lake Huron storms.

In 1872, after several locations along the coast were considered, the natural cove at Sand Beach, approximately sixty miles north of the mouth of the St. Clair River, was selected as the site of the Government Harbor of Refuge.

Eleven years later the new harbor was completed. The one mile by three mile long harbor with 650 acres of anchorage was enclosed by three breakwalls with entrances at the north and east.

At the east entrance to the harbor a skeletal light tower was erected to guide ships to the safety of the harbor. The structure was built on the breakwall and consisted of an iron tower with a small room and a lantern room above. The first Lightkeeper at Sand Beach was Captain Loren Trescott who remained the keeper for 34 years.

Captain Trescott recorded in the lighthouse log that when large storm waves crashed down on the breakwall the tower shook and the keepers feared it would topple over into the lake. They requested a new more permanent light to be built.

In 1885, a new lighthouse first showed its light over the lake and the original light tower was moved to the north entrance of the harbor.

The new lighthouse was built on a foundation separated from the breakwall to prevent wave energy from shaking the tower.

The lighthouse consists of a cast iron outer shell with the interior lined with brick and plaster. Unlike many lighthouse towers that contain only a spiral stair case, the Sand Beach Light tower contained rooms. There are six decks, the first is the living area and galley, the second and third are sleeping quarters, the fourth a workroom, fifth the gallery deck with an open-air balcony surrounding the tower and the top deck contained the lamp. There was also a building built adjacent to the tower for the equipment that produced the fog signal.

Since 1885 the Harbor Beach Lighthouse has experienced many changes. In 1899 Sand Beach changed it’s name to Harbor Beach, the breakwall was rebuilt from a wood super structure to concrete, the steam fog signal was replaced with compressed air, and the Fourth Order Fresnel Lens was installed.

1967 was the last year Coast Guard personnel from the Harbor Beach Station lived at the lighthouse. That year the fog signal building was removed and the beacon and fog signal were remotely controlled from shore.

Throughout the years, since 1885 when the lighthouse was first built, the illuminating device casting the beam of light out into the night has been altered. The flame of the original lens was fueled with pork oil but it proved to be too expensive and was replaced with kerosene. Until the lighthouse was electrified, the lens was turned to produce the distinctive red and white flash by a weight dropping through holes in the floors. The weight would then be winched back up and allowed to drop again. In 1996 the original Fourth Order Lens was replaced and the valuable original Fresnel lens was placed on display in a mock lantern room in the Grice House Museum in Harbor Beach at the entrance to the marina.

Harbor Beach is proud to say that the area has had a continuous Life-Saving Service / Coast Guard presence since 1881. With the increase of ship traffic in the area, the government established a Life-Saving Service Station in Sand Beach. The original station was replaced in 1909 by a new structure on the coal dock of the Jenks Milling Company. In 1935 a new Coast Guard Station was built on a concrete foundation 300 yards off shore that was equipped with the latest radio and navigational innovations. Today there is a modern station manned year round by Coast Guard personnel built at the north end of the harbor where they keep their rescue boats in the marina.

In conjunction with the United States Coast Guard, and the City of Harbor Beach, the Harbor Beach Lighthouse Preservation Society was founded in 1984. The Society has worked to preserve and restore the lighthouse ever since and has now added Saturday morning tours so people can visit it after a mile long boat ride out and back. The Society also replaced the fog signal building the Coast Guard removed to the northwest of the lighthouse, using the original drawings and most of the same kind of materials. It is being turned into an historical museum of maritime history in Harbor Beach to greatly expand the visitor experience. The highlight of the tour is to walk out onto the gallery deck, which is the second to last deck as one ascends the stairway, and enjoy the expansive views of the shoreline to the west and the wide open Lake Huron to the south, east and west, imagining being back in the early years and watching the shipping sail up and down the lake.

The Harbor Beach Lighthouse Preservation Society has undertaken many projects over the years. Two floors in the tower have been replaced by wood milled to exactly duplicate the original flooring. Windows over one hundred and twenty eight year-old were repaired and/or replaced with windows perfectly matching the originals. A 34-foot dock has been installed at the lighthouse to allow for safe docking. The interior paint, flaking off from years of condensation, was scraped off and the walls primed and painted. Beautiful bronze portholes neglected and painted have been brought back to their brilliant finish. The Society installed solar panels and low voltage L.E.D. lights to illuminate the exterior of the tower each evening year round, making the lighthouse completely self powered. The ornate railing around the foundation was missing several stanchions. Replacement stanchions were cast and installed. The preservation and restoration of the Harbor Beach Lighthouse will never be completed, it is an ongoing process that will continue for as long as the lighthouse stands.

Today the Harbor Beach Lighthouse stands majestically at the main entrance to the harbor casting its guiding light out over Lake Huron. The lighthouse has witnessed ships change from sail to steam, from wood to steel, from navigating by the stars to electronic navigation and now she stands just as importantly guiding Great Lakes recreational boaters to the safety of the Harbor Beach harbor of refuge.

About the author: Wayne, Skip, Kadar is the President of the Harbor Beach Lighthouse Preservation Society and is involved with preserving the rich nautical history of Huron County and author of several Great Lakes books.